The 5 distinctive Brand Lessons of 2021

What remains of this year from a brand perspective?

1. Respect against boredom: Why not only a chancellor, but every brand needs its own feeling

Respect for you’ was emblazoned on the SPD’s election posters. The statement impresses with high memorability and a clear benefit. And apparently hit the bull’s eye with the voters. After all, it was credibly embodied by the top candidate Olaf Scholz. Its unagitated, sometimes boring appearance authentically and reliably underpinned the brand promise. Even after his election as the new chancellor, Olaf Scholz tweeted: ” … Because we focus on respect and mean it seriously. And that’s what the new government will be about in the coming years – respect. I look forward to what’s coming!”

As one of its first official acts, the new federal government established a Corona Crisis Staff. The government is paying particular attention to its handling of vaccination skeptics and unwilling vaccinators. Will he succeed in treating them with equal respect? He and the SPD will be judged on their most important election promise.

Not only people, but also commercial brands strengthen their positioning when they occupy a very specific feeling.

2. Vaccine pioneer BioNTech: Why the faces behind a brand make the difference

Since the first reports, progress in finding an effective cure for Corona was tracked in 2020. The research was like a race – not only against time. Rather, it was a race between the international drugmaker AstraZeneca on the one hand and the Mainz-based biopharma company BioNTech on the other. The faces, heart and soul of the company are Ugur Sahin and Özlem Türeci. Ever since their company BioNTech developed the first vaccine against the Corona virus, everyone has known the scientific duo. The two grew up in Germany as children of Turkish parents, both embarked on scientific careers as physicians, met in a hospital, and became a couple.

The personal story of the team of scientists passionately dedicated to the fight against cancer and infectious diseases is closely linked to the success story of the BioNTech vaccine. This gave the latter a trust advantage over others right from the start. Soon many were eager to be vaccinated with “Biontech”. Meanwhile, a distant second, AstraZeneca, battled precipitation and reputation-damaging negative press: 1. Recommending that the vaccine not be licensed for people over 65 years of age, 2. The discussion about unfulfilled delivery promises, 3. Doubts about the effectiveness, 4. Thrombosis cases 5. Vaccination stop, etc. Remarkably, no one personally took the rap for it and publicly stood up for the brand. The pharmaceutical manufacturer has thus permanently damaged the reputation and acceptance of the vaccine. And thus remains just a faceless pharmaceutical manufacturer.

Especially with unknown, sensitive topics, trust is crucial. If the people behind a brand are visible, we find it easier to build trust, to forgive, to communicate. The protection of anonymity disappears, but from now on we associate human qualities with the brand. Identification is made possible. Dare to show the faces behind your brand!

3. Facebook in the metaverse: When the name becomes too small for the performance, the brand name may also be changed

Since its founding in 2004, Facebook has grown strongly – now to over 2.5 billion monthly active users. The Internet giant’s portfolio also includes Instagram, WhatsApp and Oculus VR. Then, in October 2021, the surprise: the technology group announced that it would rename itself “META”. A courageous step, since the name is the highest form of condensation of a brand identity. Most brand steersmen wouldn’t touch it with a pinch.

Why then this step? Facebook founder Zuckerberg explained that in the future the group would no longer focus on social networks, but on the development of a metaverse. And that’s where the name Facebook, as a synonym for social network, obviously gets in the way. What Zuckerberg and Co also expect from the name change can only be guessed. It is possible that the group hopes to be perceived separately from Facebook. The social network has long been criticized for its lack of data protection and its monopoly position, among other things. So much so that, in recent months, high-ranking Facebook managers have had to justify the company’s actions to the U.S. Congress on several occasions – and have hardly been convincing.

First and foremost, brands should provide orientation and security. That’s why any change to a brand’s external image must be well thought out. Changes to the brand name in particular should be treated with extreme caution. This is where we can learn from Meta. With the name change, the Group is giving us a clear signal: watch out, we are going to change our core service in the future. Away from the social network to the metaverse, the future of the Internet. At the same time, the old Facebook brand name will remain for the social network’s services under the Meta umbrella brand. This sometimes underestimated aspect is crucial from a brand perspective. By the way, a name change cannot clear a brand’s reputation – as much as Meta may wish it could. Obfuscation is quickly exposed and can damage the brand even further.

The pandemic has heightened our awareness of sustainability. Many brands have also recognized this for themselves and have launched corresponding advertising campaigns. Planting trees and climate neutrality par excellence. Consumers quickly expose such actions that do not come from genuine conviction. One thing in advance: sustainability is much more than renewable raw materials. Sustainability encompasses not only the ecological but also the social and economic aspects.

One brand that doesn’t plant trees but is still considered a sustainable pioneer is Tony’s Chocolonely. The Dutch are on a mission: to make chocolate 100% free of modern slavery. To this end, the brand has set itself 5 clear principles that guide its actions. And with this clear attitude, Tony’s Chocolonely has managed to become one of the most successful chocolate manufacturers in the Netherlands and has successfully expanded into neighboring countries.

5. why the clubhouse bubble burst: what brands should do to stay around after the hype is over

Have you heard anything else about Clubhouse in the last few weeks? No? Neither do we. The hype surrounding the social app was huge. Everyone wanted to be there. What happened? The timing for Clubhouse could not have been better. In the midst of the lockdown, the app offered a new way to gather digitally – highly exclusive via invitation links and for iPhone users only.

Tech Talk with Frank Thelen? Candy crush insights from the everyday life of Bodo Ramelow? Clubhouse evolves into the next social network. Or so it seemed. Founded with the idea of creating an audio community for artists and creatives, Clubhouse became popular as an online meeting place for celebrities, entrepreneurs and journalists. In the meantime, it no longer needs an invitation and the app also runs on Android. The exclusivity has disappeared and the hype is over. Hardly anyone is really interested in Clubhouse anymore – neither the opinion leaders nor the actual target group of artists and creatives.

The example of Clubhouse impressively shows what happens to brands when the hype wave breaks. Those responsible for Clubhouse should seek contact with their original target group, consisting of artists and creative people. And then with a clear compass, optimize the app for just that. What does that look like for you in concrete terms? Approach your customers and ask for feedback. Involve your fans in your work. Listen carefully while doing so, and optimize your performance. If you do, awareness through referral will follow all by itself.

The strongest brand is within yourself. Therefore, our conclusion in 2021 remains the same as in 2020:

Discover your Identity. Feel the Attraction.

Immerse yourself in Personal Branding 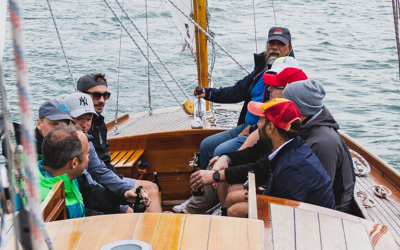 Growing companies need a shared identity as a clear compass. That’s why we and our long-term client EIZO Technologies went to our ID Summer Camp on Ammersee for three days. 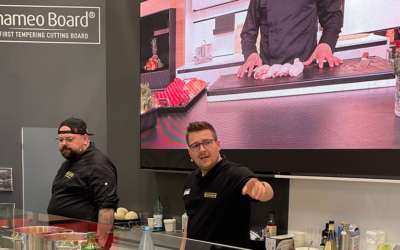 Chameo Board: From product innovation to a strong brand

What makes our new brand unmistakable and who is our message intended for? 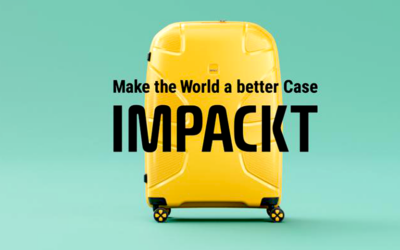 IMPACKT: How brands position themselves credibly on sustainability

Almost every suitcase manufacturer claims to have sustainable suitcases on offer – how can the brand differentiate itself from others?